Last September (Saturday, the 20th) I hit my first ace at the Junkyard Shootout.  I threw two solo cubby aces there before (with the same old chewing-gum textured putter), so it was good to make a REAL ace in front of witnesses.  Josh, Tim and Ash signed it with a colored sharpie. You can’t hardly see the signatures anymore ’cause I take it out and throw with it regularly.

I’ve thrown around 12 or 13 discs from the tee pad to the basket, all of them at Valmont. Most of them are “cubby” aces, where I threw 2 or more in succession. This bad boy rang chains on hole 5, in front of witnesses! Two aces came out of that round, so my haul was about $8.

Last night, I hit a new ace.  In the dark on hole 3.  I’m still kinda trippin’ about it.  As with the rest of the first seven shots at Valmont, 3 is a short, “easy” hole to hit.  I’ve seen Chicken and Pete, as well as a few others hit it on their first toss.  I don’t remember all of them as well as I should. 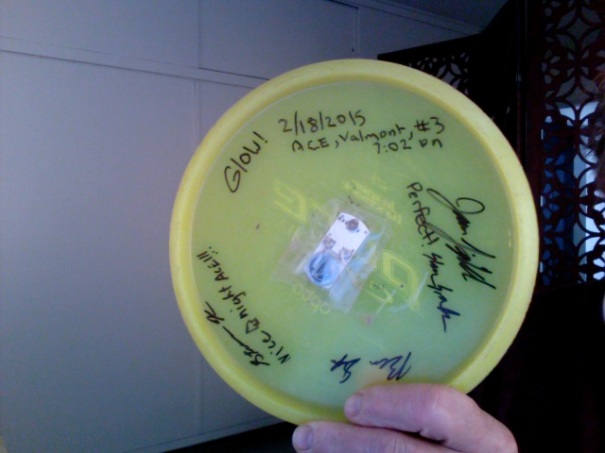 The signatures on this disc are so nice that I don’t wanna throw it. But I DO wanna throw it! Aaaargh!
Seriously, though, Thanks Guys! It looks sweeeeeeet!

Long’s Peak Disc Golf Club came out to Boulder for the final installment of their winter glow league.  There was considerable anticipation, as the ace pool stood at about $230 before the round got started.   I always try to get in a round when visitors come to my home course.  If I can’t make it, I at least want to put our best foot forward, and clean up a little.  Not knowing if I was gonna make the 6:30 deadline, I went out in the afternoon to make sure the pads were clear of the heavy snow.

There wasn’t much for me to shovel, as S & B had already kicked most of the ice off the day before.  While I surveyed the situation, I came across a loose disc.  I called the number, and made my way back to the parking lot when, lo-and-behold, there were S&B  coming up to hole 9!  I stopped over to say hi, dropped the disc, and went along my merry way, oblivious as ever.

When I realized that I set the disc down, I backtracked for about a half an hour, following my steps through the snow to no avail.  It was an inauspicious beginning.

After attending to parental duty, I was able to make it back to Valmont with about 20 minutes to go.  I don’t know WHY it is so freakin’ hard for me to be prepared for the weather, I’ve only lived here forever!  I had on a light top suitable for a cool spring afternoon, short socks, and no long-johns.  No gloves, no hand-warmers.  I only packed three discs.  You don’t need more than that at Valmont, but it is fun to have a complete lineup ready, just for kicks.

I bogeyed hole one.  We heard the telltale roar of the crowd from a solid ace on the course in front of us and I just about died inside.  I proceeded to take a phone call during my putt at hole 2 and earned a DOUBLE BOGEY.  The rest of my card moved on to tee 3.  I slid back down the eroding slope, walked up the staircase, and back down the path to join them.  I quietly acknowledged my disastrous 5 to the scorekeeper.  “This is gonna be a long night,” I chided myself. 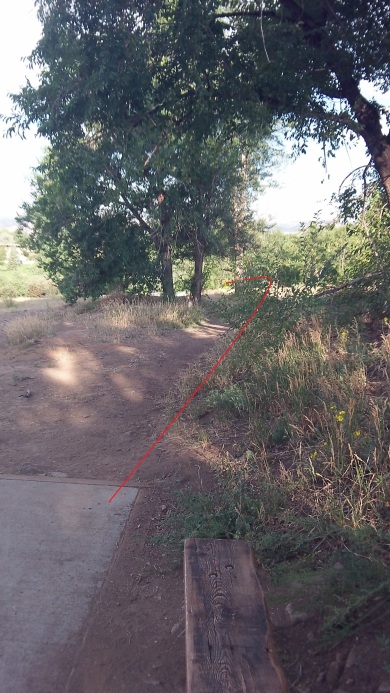 This is the line I”ve been waiting to hit for the better part of a year, now. The dim light on my disc faded into darkness before it rang out, dead solid perfect into the chains.

I stepped up, wanting to get the night done with.  My fingers were slow and old-feeling as I struggled to get my grip right.  Strangely, as I was winding up, I knew it was gonna be good.  I held my pose after the disc tore away from my hand.  I wanted to remember everything, to feel my feet, to feel the strength I put into it, the release angle.  As I settled back into my body, I relaxed my stance.  “Oh, man, Rich, that’s good,” I heard one of our cardmates call out.  When it hit, the chains rang out.  It wasn’t one of those lucky, half-hearted, out-of-gas flop aces.  It didn’t skip off anything.  It just went in, squarely and strongly, jangling and ringing across the park.  I was kinda reserved, because we didn’t see the dimly lit disc.  Everyone was excited, though, because we knew it was a good shot, even if it bounced out somehow.

I admit, I try to keep a lid on my feelings when I’m throwing.  Getting too happy or too discouraged on a particular can adversely affect the rest of my round.  I calmly walked up to the basket, getting more and more pumped as I got closer. And then, there it was, dim green light in the basket, all by itself, right where it belonged.  I let out a couple of yawps to let everyone know that I made it, and proceeded to throw 4s for the rest of the night!  I may have finished with a plus 5 or 6, but I left for home feeling uppity and satisfied with my game for the first time all season!

A tacky little memento of my ace last night!

“Four aces on one disc,” you ask, “how’s that even possible?”  Well, children, gather around the Lay-Z-Boy, here, and I’ll tell you a story about one of them.  What’s that? No, Jerry.  Only one ace story tonight.  If I had to tell them all, you’d never get to sleep!

Some bicyclists riding by stop for directions, and watch our group as we step up to the second tee.  Ash saunters over to the prairie-dog fence and engages them with his famous pitch.  He’s explaining the game, the rules.  While Ash continues, Eagle steps up and launches a dead straight drive up the hill.  The disc hits the pole beneath the cage and stops: an easy drop-in birdie.  Everyone is cheering.  Ash continues, addressing his audience, “Now Eagle, here, is one of the best disc golfers in the world, or at least the country.”  The curious observers nod politely.  “His dad, Pat, here, is a top pro, too.  This is the weekly tournament, the Shootout at the Junkyard!”  Pat is stepping up to the tee, and he launches another straight shot.  Everyone hushes for a moment as the disc hones in on the basket.  It is a near thing. The cage rattles, the disc bounces off and sets down for a second drop-in birdie.  “That,” Ash tells his goggle-eyed audience, “was a pretty good disc golf shot: a little right, a little left, and BANG! right next to the basket! That’s a guaranteed birdie, right there!”

He strides purposefully to the tee pad, and begins his warmup.  Turning sideways towards the basket, Ash holds his already beat-up Valkyrie above his head with both hands.  He exhales fully, and rocks back and forth on his feet, shifting weight and grinding his heels into the pad.  Now the disc dangles in front of him, still grasped by both hands. With the tone of a high priest to his lowly acolytes, he says to the bicyclists, “let me show you how it’s done!”

Completing a full respiration, he grinds his heels some more.  There is no word in the English language which fully captures the violent spasm that ensues.  Ash steps, winds up, grunts once at the very moment his reach is extended completely.  An audible snap resounds across the entire park.  Ash’s red Valkyrie, the one that is beat-to-snot, with hangnails and gnar all over it, the one that already has TWO aces on it!  Yes, THAT one! It responds to an exquisite release, turning, ever so gently, to the right.  It stops turning and straightens out.  The wing of the disc is turning down, and the disc fades gently to the left. It crashes straight into the target, just right of the pole. Kinetic energy transforms into the ringing of chains and the disc tumbles delicately to the bottom of the basket. Now back to your rooms before your parents get back from the movies!

Daylight Savings has fallen back an hour. The sun sets around 5 PM.  I make  dinner with my daughter, we hang out with mom for a while.  I drive home in what looks like the dead of night.  If it were the weekend, a glow round would be in order.  This is Monday, or maybe Tuesday.  What’s a DG nut like me going to do?  PRACTICE DRIVING!!

I am fortunate enough to have a middle-school football field near my house.  With a couple of glow rigs in place, I  roll down the hill on my longboard.  Throwing back and forth across the graduated field keeps me honest.   Right now, I regularly throw between 240′ and 280′, with the occasional 300′ rip coming off the tips of my fingers.

Like many distance and accuracy related activities, there is a zen-like quality to this practice.  I find driving practice to be relaxing and rewarding.  Something about throwing in the dark on a fenced-in field isolates me from the outside world.  It is easier to achieve that state of quantum-entanglement, where I am one with the disc as it turns and fades back right across the open lawn.

I’ve been visiting this field for almost a year, now, and my long tosses come more frequently.  My goal is to shatter the 300′ mark by Christmas, and start hitting the fence at the back of the end zone.  So, friends, how do you practice driving?  How far do you throw?  How do you know?